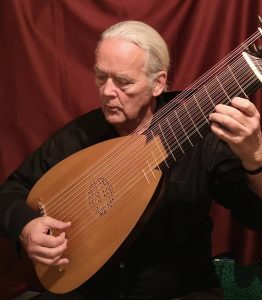 One of today’s leading lutenists, his baroque lute recordings on Naxos of the music of Sylvius Leopold Weiss have met with critical acclaim and sold hundreds of thousands of copies. His recording of the lute duets of S. L. Weiss with the late Karl-Ernst Schroeder was called “lute CD of the decade” by Early Music magazine. Mr. Barto has been invited to share the concert stage by such renowned guitarists as Leo Kottke and John Williams.

Robert Barto taught himself the lute while studying at the University of California in San Diego. After continuing his studies with Michael Schaeffer in Cologne and Eugen Dombois in Basel, he was awarded first prize in the International Lute Competition in Toronto and top prize of all instrumental soloists in the Musica Antiqua Competition in Bruges, Belgium. 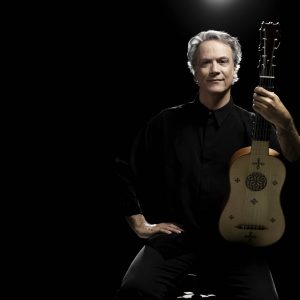 Considered a “supremely refined, elegant and cerebral musician” (Ottawa Citizen), Sylvain Bergeron is a master of the lute family of plucked instruments, including the theorbo, archlute and baroque guitar. He is one of the pioneers of early music in Canada and his work has confirmed the importance of lutes and his work has helped validate their place in baroque ensembles and orchestras in Canada.

His most recent solo album, Gioseppe Antonio Doni’s Lute Book, was widely praised for his “strong lute technique combined with outstanding musical intelligence and impeccable phrasing” (The WholeNote), while Goldberg magazine described it as “imbued with both great rhythmic vitality, delicacy and nuance.” Sylvain Bergeron has participated in more than seventy recordings, many of which have won prizes and awards. 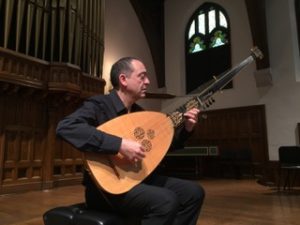 Xavier frequently takes part in major international festivals in Europe, the USA, Australia, New Zealand, Asia and South America. He is a member of well known orchestras and chamber groups including those conducted by Jordi Savall—Hesperion XXI, La Capella Reial de Catalunya and Le Concert de Nations, and has been invited to perform with the Orquesta Nacional de España, Ricercar Consort, The Rare Fruit Council, and The Harp Consort.

Xavier directs his own vocal and instrumental ensemble Laberintos Ingeniosos, which specialises in performance of music from the Spanish Golden Age. The group’s CDs includw music by Gaspar Sanz, Fernando Sor,

Francisco de Guerau, José Marín and Santiago de Murcia. He has recorded solo CDs including the complete works for guitar by Francisco Guerau, music be Robert de Visée, Luys de Narváez and Francesco da Milano. In addition Xavier Díaz-Latorre has taken part in over 40 other CDs.

He was born in Barcelona in 1968 and studied with Oscar Ghiglia at the Musikhochschule, Basel, graduating in 1993. His subsequent interest in early music led him to study the lute with Hopkinson Smith at the Schola Cantorum Basiliensis. Between 1985 and 1992, as a classical guitarist, he won international performance prizes in France and Spain. From 1996 to 2005 he was actively involved in baroque opera, participating in major productions with conductors such as René Jacobs, Jordi Savall, and Wieland Kuijken.

Xavier has been invited to give lectures and masterclasses at major music academies such as Schola Cantorum Basiliensis, the Juilliard School, New York, the Sibelius Academy, and the University South California, He is resident professor of ute, basso continuo and chamber music at the Escola Superior de Música de Catalunya (ESMUC) and teaches lute at the Royal Conservatory of Brussels.
www.xavierdiazlatorre.com 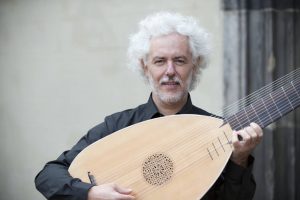 Eduardo Egüez is founding member and artistic director of the Ensemble La Chimera, a group that showcases the fusion of early and modern music. Their repertoire features a number of his arrangements and compositions. Eduardo Egüez has conducted La Púrpura de la Rosa (Torrejón y Velazco) at the Potsdamer Festspiele, L’Orfeo (Monteverdi) in Santiago and Rancagua, Chile and recently Gli Intermezzi della Pellegrina at the Innsbrucker Festwochen der Alten Musik.

He teaches lute and basso continuo at the Zurich University of the Arts (Switzerland) (www.zhdk.ch).

Swedish lutenist Jakob Lindberg, was inspired first by the Beatles. After studying music at Stockholm University he went to London to explore lute repertoire at the Royal College of Music under, the guidance of Diana Poulton and succeeded her as Professor of Lute in 1979.

Jakob has made numerous recordings for BIS, presenting a wide range of music on CD for the first time. He has brought Scottish lute music to public attention, demonstrated the beauty of Italian repertoire for chitarrone and recorded chamber music by Vivaldi, Haydn and Boccherini on period instruments. He is the first lutenist to have recorded the complete solo lute music by John Dowland and his recording of Bach’s music for solo lute is considered to be one of the most important.

An active continuo player on the theorbo and archlute, Jakob has worked with many well-known English ensembles including The English Concert, Taverner Choir, Monteverdi Choir, Chiaroscuro, The Orchestra of the Age of Enlightenment and The Academy of Ancient Music. He is also in demand as an accompanist and has in recent years given many recitals with Dame Emma Kirkby. 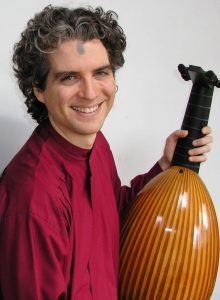 Lutenist Christopher Morrongiello is a former British Marshall Scholar and a graduate of Mannes College of Music, the Royal College of Music and the University of Oxford, where he earned a doctorate in historical musicology. He was a prizewinner in the BBC’s Radio Two Young Musician of the Year competition and a recipient of a Marco Fodella Foundation scholarship for studies and research in Milan, Italy. In 2006 LSA Lute Fest he was chosen to give the first of the Patrick O’Brien lectures.

Dr. Morrongiello is a professor of music history at Hofstra Univerity where he directs the Hofstra Collegium Musicum. He is a frequent guest artist with leading early music groups and is often invited to teach, lecture, and perform at international music festivals and workshps. He is Artistic Director of the Long Island Early Music Festival, now entering its 4th season.

Morrongiello has recorded for EMI, Avie Records, Gamut Music and the BBC. Recently the Metropolitan Museum of Art (New York City) produced several video recordings of him playing on a variety of historical and new lutes for their renowned instrument collection. 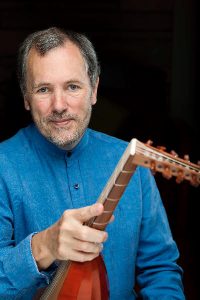 Initially inspired at the age of seven by the early 60s instrumental pop group The Shadows, Nigel studied classical music playing the violin and guitar, and eventually discovered his real path in life—the lute, when he was 15. Basically self-taught on the lute, he has been playing and teaching for nearly 50 years.

After hearing one of Nigel’s Bach recitals in London, Julian Bream recalled in 2002 “I remember going to a remarkable recital, one which I wish I had the ability to give: it was one of Nigel North’s Bach recitals, and I was bowled over by how masterful and how musical it was. A real musical experience, something you don’t always get from guitar and lute players and which, in general, is pretty rare.”

Recordings include a four CD boxed set “Bach on the Lute” (Linn Records), four CDs of the lute music of John Dowland (Naxos), and a new ongoing series of music by Sylvius Weiss (4 Cds) and Francesco da Milano (3 Cds, both on BGS.) 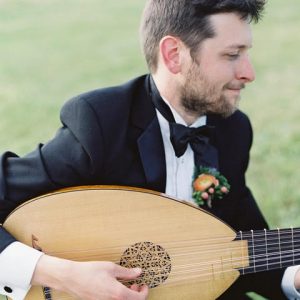 Charles Weaver is on the faculty of the Juilliard School, where he teaches historical plucked instruments and baroque music theory. He was music director for Cavalli’s La Calisto with New York’s Dell’Arte Opera in summer 2017, when The Observer remarked on “the superb baroque band led by Charles Weaver . . . it was amazing to hear what warm and varied sounds he coaxed from the ensemble.” He has served as assistant conductor for Juilliard Opera and has accompanied operas with the Yale Baroque Opera Project and the Boston Early Music Festival. As an orchestral musician, he has performed with the New York Philharmonic, the Philadelphia Orchestra, and the Virginia Symphony. His chamber appearances have included Quicksilver, Piffaro, Chamber Music Society of Lincoln Center, the Folger Consort, Apollo’s Fire, Blue Heron, Musica Pacifica, and
others. He also works with the New York Continuo Collective, an ensemble that mounts workshop productions of seventeenth-century vocal music. He has taught at the Lute Society of America Summer Workshop, the International Baroque Institute at Longy (Boston), and the Madison Early Music Festival. He is the schola director at St. Mary’s Church in Norwalk, Connecticut, and he is pursuing a doctoral degree in music theory at the City University of New York. 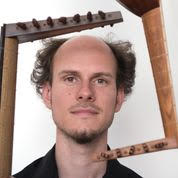 Bor Zuljan is active in a variety of musical genres and projects that explore the synthesis between contemporary and early music, different world music traditions, jazz and improvisation. He plays guitars, different kinds of lutes, vihuela, oud, tar and other early and traditional plucked-strings instruments. The search for the connection between sound, image and word led him to collaborate in various interdisciplinary projects.

Bor performs regularly as soloist and with ensembles, such as Le Concert Brisé, Geneva Camerata, the Slovenian Philharmonic Orchestra, Vortex, in a duo with Dusan Bogdanovic, as well as with his ensemble La Lyra. His projects have been presented in festivals including the Laus Polyphoniae in Antwerp, Oude Muziek in Utrecht, Mousiké in Bari, and Festival Radovljica in Slovenia. He also performed in China, Algeria, Germany, France, Switzerland, Spain, Denmark and in Croatia.

Since 2011 he has been the artistic director of Flores Musicae an early music festival in Slovenia. His critical edition of Gorzanis’ second lute book has recently been published by the Slovenian Musicological Society.

After graduating with a degree in jazz and classical music from the Ljubljana Conservatory of Music, he continued his studies with Aniello Desiderio in Koblenz, Germany. In 2007 he started studying at the Haute Ecole de Musique de Genève where he was awarded bachelor’s and master’s degree in guitar and lute studying with Dusan Bogdanovic and Jonathan Rubin. He continued with a specialization in medieval music and finished a MA in music pedagogy. Recently he has been working as research assistant at the same school on a project on Fantasia improvisation on lute in the 16th Century.

Bor teaches lute at the Conservatoire Populaire de Musique, Danse et Théâtre de Genève, and has lectured at conferences and given master classes at institutions such as the Juilliard School of Music, the Schola Cantorum Basiliensis, the Fondazione Giorgio Cini in Venice, the Haute Ecole de Musique de Genève, the Escuela Superior de Musica de Mexico, and the Ljubljana Academy of Music.